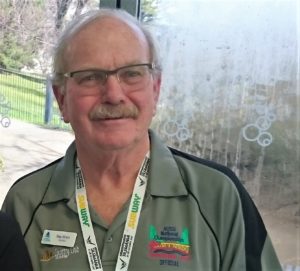 Ray’s first encounter with masters swimming was at the Mowbray pool in Launceston in July 1991 just after he had moved to there from Hong Kong.  Ray was looking to improve his swimming for triathlons and walked into an Aerobic swim night and promptly was told that he should do an 800 – welcome to masters. He joined the Launceston club shortly after.

After about 18 months Ray felt that the communications side of the club could be improved so he nominated for the publicity officer’s position and continued in that role for about 5 years. He then had a bit of a spell at the end of the 90s  was elected Vice President which led onto Treasurer and eventually President. Ray was awarded Club Life membership in 2008.

In 2000 Ray  nominated for the Branch Treasurer’s position taking over from John Pugh who had moved to the National Executive. Subsequently, he have held the positions of President, Secretary, Secretary/ Treasurer and still active in the role of Branch Registrar and is the Public Officer.

Ray “cut his teeth” as meet director on numerous short and long course events in Launceston at the old Mowbray pool and Windmill Hill in its old and new formats.

This lead on to being appointed Convenor and Meet director for the 2005 MSA National Championships in Hobart and Convenor and Meet director for the 2010 Nationals in Launceston. The 2010 Nationals were a bit of leap of faith as Tasmania had  nominated the short course event at Windmill Hill before construction of the new pool complex had even started. It was a close run thing with the score board only being installed 2 days before the Meet.

Ray  also achieved his referees accreditation in 2013 and hase taken over as the Branch Technical Coordinator following the  retirement of Don “Roo” Reynolds in 2017.

Ray is currently  member of the National Technical Committee having undertaken that role in previously stint in 2014/15.